Biking for Recreation vs. Transportation: The suburban cycling experience 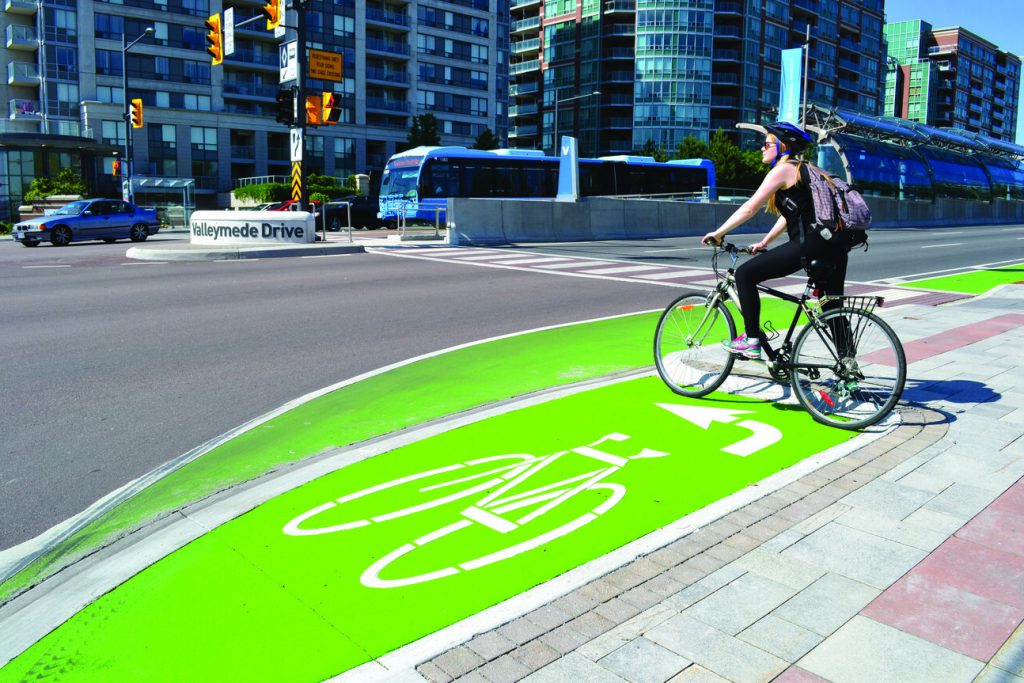 Not far from my house is the lovely multi-use West Dean Trail. A gently winding path tucked between residential neighbourhoods, this trail connects to the Eglinton West Trail which in turn connects to the Mid-Humber Trail. As far as recreation goes, it is possible for me to cycle for quite some time along safe and enjoyable routes. I am very fortunate.

However, my neighbourhood has very few on-street bike lanes. The City of Toronto Cycling Map only shows three, the longest and most useful of which doesn’t connect to the other two. There are also no cycle tracks, but separated bike lanes are being included in the nearby Six Points redevelopment.

Bike trails for recreation vs. routes for transportation

The multi-use trails, as wonderful as they are for recreation, are not sufficient infrastructure for transportation. They do not connect people to amenities, workplaces, or schools. People, like myself, who wish to use cycling as a means of transportation, must either brave busy roads or discontinuous residential streets. So, what do you choose? A stressful journey alongside speeding cars or an inefficient route that extends your journey? Likely, you choose your car.

To borrow the words of Young and Keil from York University’s City Institute, I live in an area that could be described as, “the in between.”1 Straddled between the last two subway stops of the western portion of Line 2, my neighbourhood feels both a part of Toronto and separated from it. Etobicoke, like the other old suburbs, is neither a part of the old downtown nor a part of the new suburbs. While my proximity to the subway makes public transportation the best way to commute downtown, my journeys within my neighbourhood are predominantly done by car.

When I lived in places where I had bike lanes that connected me to my work, grocery store, and other daily needs, I found myself choosing cycling more often as my main mode of transportation. But now that I don’t have access to those safe routes, I feel the need to give myself a pep-talk to get on my bike.

How to make cycling an easier choice

There are a few things I can do as an individual to make cycling more enjoyable and less stressful. I can sign up for lessons on cycling safety such as CAN-Bike. I can use the BikeSpace app to find bike parking, and use bike mode on Google Maps to plan out my routes to maximize time on quiet streets.

I can start by using my bike for trips when I’m not pressed for time and can go at a comfortable pace. Maybe, I’ll splurge and get some cool gear to help me carry larger loads. All of these things can help make cycling as a form of transportation a more enjoyable experience.

There are also many improvements that can be done at the city and regional level to make cycling a safer and more enjoyable option, such as clearly marked or separated bike lanes and the use of green paint to make bike lanes more visible.

York Region has implemented bike boxes to help cyclists make left turns more safely through a two-stage process. And Mississauga has used “crossrides” to create a designated space for cyclists to cross intersections that keeps cyclists separated from pedestrians and vehicles.

More cyclists on our roads makes cycling safer for everyone

Walking through my neighbourhoods these last few days, I have never seen so many people in my neighbourhood out riding their bikes, including families. Riding with other cyclists can go a long to making you feel safer and more visible to other road users.

Campaigns such as Bike Month help encourage beginner cyclists through group rides and other events, although this year will likely be different given COVID-19. Even without formal group rides, just seeing more people cycling during the pandemic can help encourage even more people to take up cycling.

Cycling offers an affordable, healthy, and environmentally friendly form of mobility. It’s time that more people start thinking of cycling as not just recreation, but transportation. Transitioning from occasionally riding on the weekends to using your bike for trips to work is a big step, but programs like Smart Commute are here to help.

Through the Smart Commute program, pointA is offering a series of webinars on active travel and healthy living during COVID-19 and beyond, focused on helping those who live or work in York Region adjust to the ‘new normal’ and explore sustainable options of travelling around the region.

The Design the New Normal campaign includes three cycling webinars that cover the basics such as how to pump your tires and the rules of the road, how to fix a flat tire, and tips for everyday cycling. Whether you have never cycled, or are only cycle occasionally, the webinars will help you feel more confident on the road.

In addition to the webinars, the campaign also includes a design contest, which invites participants to share their vision for how they hope to travel around York Region.

Learn more about the campaign here.